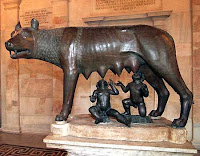 It's interesting to see the banking trade associations, who normally rail and fulminate at government intervention in the marketplace, madly try to protect the government special favors or munificence already bestowed... I'm talking about the Transaction Account Guarantee Program (TAG).  TAG was an emergency measure, taken at the depths of the 2008 financial crisis, to manage systemic liquidity fears and maintain financial system stability. It granted unlimited FDIC deposit insurance protection to non-interest bearing transaction accounts.  Its latest extension expires on December 31, 2012.  The banking trade associations are lobbying for an additional extension.

In Economics 101, we were taught about the workings of Adam Smith's invisible hand. What we are seeing play out with the TAG extension, is Adam Smith's other hand at work... his visible hand.  The pursuit of self-interest to gain or maintain government largesse.

I'm reminded of an earlier government financial emergency measure, the 1933 Glass-Steagall prohibition on paying interest on demand deposits and the establishment of government-administered ceilings on the maximum rates of interest that could be paid on savings and time deposits. Congress wanted to avoid a repeat of the speculative banking behavior that culminated in the 1929 financial crisis, and that eventually brought on the Great Depression. The idea behind the measure was a sense that excessive competition for deposits (some characterized it as "destructive competition") created an undesirable narrowing of bank net interest margins. This narrowing, in turn, resulted in an anxiety for income that was thought to have promoted risky bank lending and investment practices.

These price controls remained in effect until the 1980 Depository Institutions Deregulation and Monetary Control Act established a six-year phaseout of the maximum rates of interest that could be paid on savings and time deposits in Regulation Q, the Federal Reserve regulation through which these price controls were administered . Even though government-determined interest rates on savings and time deposits went away in 1986, it wasn't until the passage of the Dodd-Frank Act that the last vestige of these measures was repealed. The payment of interest on business demand deposits was allowed as of July 21, 2011. On that day, an amazing 78 years after these emergency measures were first enacted by Congress, Regulation Q, was finally consigned to the ash bin of history.

Even if the extreme hypotheticals advanced by the trade associations for TAG extension  have some kernels of validity, a weaning off of government support is in order. A step-down approach to the normal deposit insurance limit of $250,000 would allow us to examine the true nature of the funds flows, instead of our fears.
Posted by Ron Lindhart at 9:05 AM