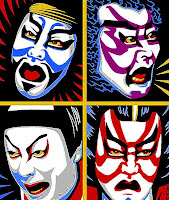 Well, this week in banking news ought to go down in the annals of U.S. banking history as Kabuki week... a highly-stylized drama with elaborate make-up worn by its performers.

Consumer protection is an important public policy priority, but in the hands of an unaccountable agency with a single head and boundless financial resources, it can become the nanny of all nannies when it comes to layering on burden and compliance obligations for community banks.

The second piece of Kabuki theater came from the Financial Services Roundtable and the American Bankers Association.  Both are squawking about the new interagency leverage ratio proposal for the eight largest U.S. banks.  They claim that the new leverage requirements would put U.S. banks at a significant competitive disadvantage and threaten our economic expansion by adversely affecting the level and cost of credit.

To the first issue, competitive disadvantage, I invoke the concept of American Exceptionalism.  Americans are leaders, not followers.  When the policy leadership is about a stronger, more resilient global banking system, through the mechanism of a stronger U.S. banking system, that's a good thing.  Americans have never thought that keeping company with the lowest-common denominators was a virtuous American value.  Plus fortress-like balance sheets, in our present risk-on/risk-off anxiety-ridden funding markets, ought to be a competitive advantage, not a disadvantage.

Regarding the level and cost of credit issues, let's start with the level of credit.  Don't underestimate the new lending opportunities that will now accrue to the regional banks and the other 7,500 banks in the United States because leverage requirements are being raised on eight U.S. mega-banks.  In the old days of double and triple the number of commercial banks that we have now, the United States had a highly developed bank correspondent network for syndicating and participating loans so that the largest corporate customers could be adequately served.  Securitization has changed the nature of that business in a big way over time, but the bones of the old system are still there.

As to the cost of credit, the large bank trade groups are probably exactly right.  With the eight largest banks accounting for more than half of the market share in the United States, credit spreads (above the cost of funds) are likely to rise nationwide.  Most economists specializing in market structure and competition would agree that a small group of market participants with a majority share of any given market are, in their parlance, "price leaders" and not "price-takers".  The structural credit spreads above the cost of dollar funding will likely increase to compensate for higher common equity capital requirements.

The Wall Street Journal "prime" base rate, at 3.25% today, is about 3% above the target federal funds rate of .25%.  Any increase might be constrained to some degree, however, by the banks in the next tier of the marketplace, the large regional banks (though some will be free-riders), and potentially lower funding costs owing to stronger mega-bank balance sheets.

Those higher credit costs will be paid by you and me, either directly through the consumer or mortgage loan process, or in the form of higher product prices generally as the higher costs of corporate credit works its way into the national economy.

Maybe also in bank fees, but, in my opinion, the jury is out.  Our glorious news media seems to have over-sensitized retail bank customers to bank fees (overdraft fees, for example) in the same manner that they have over-sensitized consumers to changes in gasoline prices.  A 5 cent increase in the cost of gasoline amounts to only $1 for the driver of a car with a 20-gallon fuel tank, but people will patronize the gas station across town if the price for a gallon of gasoline is a couple of cents cheaper over there.  Go figure.  The same may be presently true for retail banking services.

Higher credit costs are a difficult, but necessary public policy choice.  Would you pay a little extra for the things around you in exchange for a safer and sounder banking system?  Those who saw the values of their homes drop like boulders in the Great Recession... who also saw the value of their retirement savings evaporate or be subject to miniscule rates of return.... and who may have also lost their jobs in the process, would probably say yes.

Higher nationwide credit spreads could also be a very nice back-door market subsidy to community banks that have been valiantly battling net interest margin compression for the last few years.  A banking market-wide structural increase in credit spreads could spell a bit of sorely needed relief.