Talking Past Each Other on TBTF 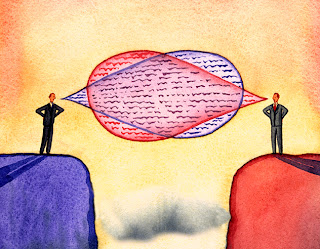 Note to Readers:  For those of you who knew about my recent hip joint replacement surgery, thank you for your kind words and support over the last few weeks.  For those who didn't know about it, thank you very much for your patience.  I hadn't planned on such a long hiatus between blog postings.

I'm now sporting a Titanium Stryker Accolade II 127-degree Total Hip System, which I'm told is a 'de rigueur' fashion accessory among the mobility-challenged geriatric cognoscenti these days.  So far, up to a mile and a half daily (with a cane) and should be back to walking unassisted in a couple more weeks.


With the arrival of the Lehman Brothers +5 anniversary, we have had to endure a flurry of articles analyzing the current state and future prospects for our financial system, generally split into glass half-empty and glass half-full factions.  The most contentious issue being whether the Too Big to Fail (TBTF) phenomenon has been appropriately addressed through the Dodd-Frank Act and its excruciatingly slow crawl of implementing regulations.

The Obama Administration, through the U.S. Treasury Department, claims that the TBTF phenomenon has been ended.  Officials have been crowing about it in speeches and in this self-congratulatory Lehman +5 memorial document - The Financial Crisis Five Years Later: Response, Reform, and Progress.  The Administration asserts that, with living wills, orderly liquidation authority, and other prudential supervision enhancements, even the largest banks can be resolved without the need for taxpayer-funded federal government bailout assistance.

Others, like the American Enterprise Institute, in a piece called Taming the Megabanks, assert that the Too Big to Fail issue has only been partially addressed.  Many who believe so, myself included, believe the Dodd-Frank orderly resolution regime does not take into account the knee-buckling knock-on economic losses that will result from the resolution of one (or more) of the global systemically important financial institutions.

Owing to their size, relative to the Gross Domestic Product (GDP) of their home countries, any loss large enough to trigger the orderly resolution regime for a megabank will likely be large enough to send those economies plummeting into recession.   At that point, the issues are, first, how large are the losses to existing shareholders, as well as the cumulative financial losses sustained by those bailed-in; and second, how will those financial losses subsequently propagate and radiate outward through the national and world economies.  As important as an orderly resolution regime is, as a component of macroprudential policy, containment of the Day 2+ costs of megabank failure should also be a critical policy component for reducing ultimate costs to the government.

To get a sense of scale, as of June 30, 2013, JPMorgan Chase & Co. reported assets of $2.4 trillion and equity capital of $210 billion.   Putting all other resolution-related costs aside as well as whatever contagion multipliers might exist due to leverage in the system, just a $210 billion hit to the economy would be, to say the least, seismic.

It is the size of the cumulative loss to existing shareholders, the bailed-in creditors and uninsured depositors that needs to be reduced in order to limit the impacts of bank failure to the national and world economies.  That argues for less market share concentration in the market for banking services in the United States (and globally). That also means cutting these megabanks down to more easily digestible sizes through legislation, like the proposed 21st Century Glass-Steagall Act.

One other option, that I haven't heard kicked around, is to restore the national bank borrowing limit (12 USC 82), which was repealed by the Garn-St. Germain Depository Institutions Act of 1982.  The national bank borrowing limit stated that bank indebtedness could not exceed the amount of the bank's capital stock plus 50% of its unimpaired surplus, subject to certain specific exceptions.  That would limit non-deposit bank leverage and bank size.

As long as the world's megabanks are as large as they are, even in a perfect world of workable global resolution regimes, national governments will always be holding the bag for outsize losses relative to the size of their economies.  Instead of direct bank bailout costs, the government pays in other ways, through economic shock absorbers such as increased unemployment compensation, food stamp assistance, and economic stimulus initiatives as it picks its way through the resulting economic carnage and its collateral damage.

Governments, like ours in the U.S., who believe that they are opting-out of megabank rescue scenarios by merely bailing-in creditors and uninsured depositors through orderly liquidation authorities, while ignoring the current size of global megabanks, are engaging in a form of dangerous, and ultimately costly, self-deception.