What's Wrong with Being Balkan? 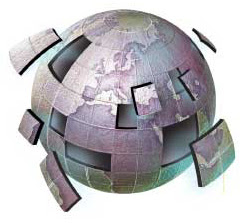 
Well, it's been over a year now and the only sound coming from the Fed at this point is the sound of crickets chirping in an empty room.   The effort to implement these prudential standards has been reportedly stymied by objections by certain foreign countries, foreign bank lobbying groups, and trade associations representing large U.S. banks who fear in-kind retaliation - "reciprocal responses" for the diplomatically inclined.  62 discrete comment letters have been filed to-date by various entities, along with 925 form letters.


Here was the Fed's rationale as outlined in the NPR:

The issues described above-- growth over time in U.S. financial stability risks posed by foreign banking organizations individually and as a group, the need to minimize destabilizing pro-cyclical ring-fencing in a crisis, persistent impediments to effective cross-border resolution, and limitations on parent support-- together underscore the need for enhancements to foreign bank regulation in the United States.”

Comment letters on the proposed Fed regulation were rich with accusations that this would create "balkanization" in the global banking system.  Timothy Adams, representing the Institute of International Finance (IIF) included this in his comment letter to the Fed objecting to the rule:


"... Regulatory fragmentation can be seen through the increasingly national approaches in key reform areas, such as provisions for resolution of failing firms, and capital and liquidity requirements. Differentiation in the implementation of globally agreed standards and domestic bias in supervisory practices, have also contributed to a sense of financial "Balkanization"... "

The joint comment letter submitted by The Clearing House, the American Bankers Association, and the Financial Services Roundtable, included the following:

"The Associations believe that the Proposal's approach, which would necessarily involve the balkanization of a sizable share of the global banking system along national borders, could both impair economic recovery and growth and increase, rather than diminish systemic risk."

Referred to in a couple of other comment letters is a quote from current Governor of the Bank of England and Chairman of the Financial Stability Board (and former Bank of Canada Governor) Mark Carney:

"Left unchecked, these trends could substantially decrease the efficiency of the global financial system. In addition, a more balkanized system that concentrates risk within national borders would reduce systemic resilience globally."

Folks, may I have permission to speak up and support the terms "balkan" and "balkanization"?  Using the terms "balkan" and "balkanization" as accusations, epithets, and terms of derision, masks the fact that spreading your risk (and your risk cushions) represents an important concept in the field of prudent risk management.  The U.S. learned many years ago... you don't anchor your entire Pacific Fleet in Pearl Harbor.

In most of the letters arguing against the proposed regulation, there is a certain idealistic and Utopian tone to how the global financial system, and its system of global regulatory coordination, works.  Prudential supervision, from a host country banking supervisor's perspective, is worrying about how to deal with the downside of risk as it impacts the constituency who appointed you to be their steward.  Sure, one can go overboard on protecting ones own citizenry, but there is a middle ground... and I believe the Fed tried to find it.  Maybe as the good work of constructing a global regulatory framework nears that Utopian ideal and when the bad memories fade about how imperfect the global financial system presently is, then it may be time to peel back the national ring-fencing of risk, capital, and liquidity.

Some of the comments against the proposed Fed regulation also seem to assume, with a prophet's degree of certainty, that all that needs to be known about macro-prudential risk is indeed known.  And I think that is because the global financial crisis painted the macro-prudential risk landscape with brilliant hues.  The problems presented in the aftermath of the financial crisis were so stark and easily visible (if not blindingly so) to everyone... liquidity stresses, market collapse, credit quality deterioration, etc.  These risk issues, having leviathan proportions, served to provide unmistakable targets for problem resolution, risk remediation, and regulatory action.

As we all know, the financial crisis and the concurrent economic slump are slowly becoming rear-view mirror issues and the condition of bank balance sheets is slowly improving.  The risk landscape will no longer provide such obvious and actionable cues.  Quickly departing are the days when risk management priorities are handed to bankers (and bank regulators) like low-hanging fruit.

We are moving into a business environment where the emerging risk cues will either be small, subtle, and creeping, or alternatively, immediate, surprisingly radioactive, and potentially explosive.  The direction and momentum of the banking industry itself also seems to be changing by moving away from the protective inward focus that comes from nursing your wounds, apologizing for past sins, and paying fines for violating laws.  Force projection, as the generals and admirals call it, will begin to make a stronger comeback this year, particularly in the regional banks.

We are getting back to expecting the unexpected... that's why it's so important to implement all of the Dodd-Frank Act enhanced prudential standards as soon as possible.
Posted by Ron Lindhart at 8:46 AM