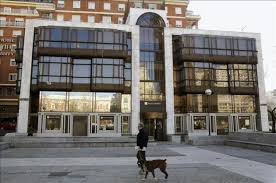 While in Madrid, Spain a couple of weeks ago on other business, morbid curiosity drove me to pop on over to the city's highly affluent and chic Salamanca District to view (figuratively speaking) the smoldering remains of a U.S. financial drone strike.  As I got off the bus, I saw over there by the Hard Rock Cafe, tucked away in a corner off the Plaza de Colón, the head office of Banco de Madrid, SA.

A sad sight indeed.  As I walked over to the small plaza in front of the bank, there was evidence of the removal of the bank's large signage from the building's roof-line.  Gilded lettering, identifying the bank, had been pried off of blocks of granite in the pedestrian plaza, leaving just a faint outline of the bank's name where the harsh sun of the Castillan meseta was unable to bleach the stone.  Like a tombstone without an epitaph, the bank's name remained on the transom above the building's main entrance door.

In front of that main entrance stood a solitary security guard, shooing off inquiring passers-by while allowing other building tenants through the door.  Very few people came or went during the time I spent pondering and reflecting on this situation.

You see, Banco de Madrid (BdM) is a bank in liquidation.  Without advance warning, on March 10, 2015, the Financial Crimes Enforcement Network (FinCEN), an arm of the U.S. Treasury Department, fingered its parent company, Banca Privada d'Andorra (BPA), as a "foreign financial institution of primary money laundering concern" for abetting transnational organized crime in Russia and China, as well as corrupt officials in Venezuela.

Andorra, a tiny sovereign principality high in the Pyrenees mountains, has five banks.  BPA is one of them.  From 2009 to 2014, BPA was alleged to have provided assistance to third-party money launderers, "including professional gatekeepers such as attorneys and accountants", by laundering hundreds of millions of dollars through correspondent bank accounts at four U.S. banks.  In return, BPA's high-level managers accepted payments and other benefits from their criminal clients.

Concurrently, the Bank of Spain also seized BPA's 100%-owned banking subsidiary in Spain - BdM.  Shortly thereafter, a crushing wave of funds withdrawals by customers left BdM unable to meet its obligations in a timely manner.  When Spanish authorities refused to bail out the bank, the bank filed for bankruptcy protection on March 16, 2015.

From a human perspective, there is no denying a degree of unfortunate collateral damage from FinCEN's financial drone strike as it impacted BdM's unsuspecting Spanish bank customers and bank employees who were not involved in aiding and abetting money laundering.  FinCEN noted that "BPA's activity of primary money laundering concern occurred largely through it's Andorra headquarters." FinCEN never mentioned BdM in its news release.

Fortunately, most of BdM's bank customer deposits were insured.  But for the estimated 500 clients with uninsured deposits, they get receivership IOUs.  Those bank employees who are unable to secure new jobs at other banks, will join the swollen ranks of Spain's unemployed.

The take-away?  FinCEN can exert brute force with a blunt instrument against any bank in the world.  It gives new meaning to the concept of "U.S. global force projection"... a term usually associated with our warriors at the Pentagon.

Unlike the genteel megabank check writing-for-wrongdoing exercises engaged in by other U.S. banking regulators, the long arm of U.S. law enforcement, as practiced by FinCEN in its PATRIOT Act Section 311 proceedings, ends in a tightly clenched fist, and sometimes a financial mushroom cloud.

So over there in the center of Madrid's Plaza de Colón, standing on a high marble pedestal, is a larger-than-life statue of Christopher Columbus gazing west towards the Americas.  Maybe he should also be scanning the horizon for FinCEN drones.