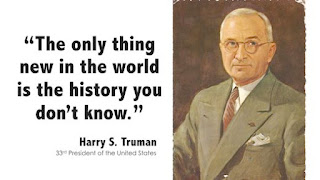 It's a bittersweet simultaneous juxtaposition:  the proud celebration of the 150th Anniversary of the Office of the Comptroller of the Currency (OCC) and the ongoing congressional and media bruising recently-appointed Comptroller of the Currency, Tom Curry, is taking on behalf of the agency he leads.  For OCC alumni, current employees, and the interested public,  it might be instructive for us to think about the lessons we can learn (or might have learned) from our OCC forebears.

In this blog posting, we are going to turn the calendar back almost a generation, 17 years, to an excerpt of a speech given by Emory "Wayne" Rushton.  A seasoned veteran examiner, Wayne Rushton had just been selected OCC Manager of the Year by incoming Comptroller Eugene Ludwig.  The speech was delivered in Detroit, Michigan to a conference of OCC managers and executives.

At my request, Wayne was kind enough to share a copy of his speaker's notes from his personal archives.  Excerpted below is a portion of his notes.  These notes were not meant to be prepared text.  All points of emphasis are his.  Only format adjustments were made to accommodate the nationalbankexaminer.com financial blog format:

"... And I BELIEVE very deeply that what we're trying to do now with supervision by risk is the right way to go.  At the very LEAST, it raises the consciousness of the industry to the need for effective risk management systems and controls and to the fact that we'll be looking at them more closely.

But some of us here today have had to deal directly and personally with bankers during MUCH more stressful times and we've seen first hand proof of the axiom that "desperate people do desperate things."  We've seen over and over again that when banks come under stress and start getting desperate, the very FIRST things they tend to neglect or that they purposefully begin to compromise are their risk management systems.

So, we've got to be absolutely certain that supervision by risk includes not only the capability of identifying, measuring, and discussing risk but also the guts to intervene in those situations where the quantity of risk is clearly getting too high for the quality of systems that are in place.  And to do so WHILE THERE'S STILL TIME TO AFFECT THE OUTCOME.  Preferably with moral suasion, but more directly, if necessary.

Some of our biggest successes... though under reported at the time - came as a result of our willingness to step over the line and provide a "significant emotional experience" to the board of directors while they still had enough time to fix the problems THEMSELVES.

But too often in the past, we let things deteriorate beyond the point of no return before we finally acted.

We waited and we worried as underwriting standards kept sliding down, rationalized away under the guise of "competitive necessity";

as assumptions about oil and gas prices or rent rolls five years out went through the roof  based on pure speculation;

as internal audit and loan review staff were being scaled back in a near sighted attempt to help control expenses;

as desperate lenders and desperate traders found new ways to "bet the bank" to "double up and catch up", usually a poor strategy in poker, and almost always dangerous in banking!

So that by the time we finally did act, it was frequently just too little too late, the bullet was already in the body.

Ironically, though, that was when our supervisory model for problem banks really kicked into high gear when they were weakest and least able to take our burden.  Basically, we'd just examine them to death until we found enough embedded losses to wipe out their capital or, in the process, scared away their liquidity and then we'd turn out the lights and toss the keys to the FDIC.

So, I believe we have to go beyond the intellectual stage of defining what banking risk is, although that was an essential step.  Beyond the ministerial stages of adding an SMS screen here and word smithing strategies there, although those things have to be done.  But let's REALLY take the plunge and do whatever's required to connect up our theories with our ACTIONS, out in the banks where it counts!

And that will take some doing INTERNALLY,  ADMINISTRATIVELY through technical training, reassignments, rescheduling, REORGANIZING, WHATEVER IT TAKES, so that we match the RIGHT PEOPLE with the RIGHT RISK, at the RIGHT TIME, not when it's too late to do anything about it.

It may prove controversial, but we can't let ourselves be held hostage by fears that some bankers and some examiners may not agree with, or may not like what we KNOW IN OUR GUT we're going to HAVE to do sooner or later. There's just too much at stake.

But intervention is tricky business, I know.  There's only a fine line between advocating change and becoming the instrument of change itself.  Between an "examiner recommendation" and an "OCC mandate" and sometimes its just a matter of the banker's perception.  And we're likely to get burned if we're too quick OR too slow.

But that's always been the defining feature, the artistry of good bank supervision, knowing when it's necessary to cross that line and when it's not.  And knowing HOW to do it so that your motives and conduct are above question, so that even the most contentious banker knows you're really doing it for the good of the bank.

It most certainly requires the right people

EXAMINERS who're skilled, experienced, and committed; not nit pickers or gunslingers, but not shrinking violets either.

And I've got to interject something here about what I view as our OWN operating risk, it could be our Achilles Heel if we don't do something about it.  And that is there are more than a few examiners in the field today who perceive that when OCC management says "no nitpicking", it really means "no criticizing" PERIOD!  That, my friends, is a recipe for disaster!!!

We've got to know what's going on out there among our people, what they're thinking, saying everyday out in the field, in the banks.  Our "inreach" has to be just as good as our outreach!

Focus Groups are a giant step in that direction, but they can't do it all.  This HAS to be a shared responsibility between examiners and management.  There could be no greater disservice by an examiner to the OCC or to himself or herself than failing to report known problems;  than promoting a false sense of security that things are better than we know them to be; or, heaven forbid, that we're "on top of things", if in fact we're not!!!  That too would be a prepaid ticket back to the dark days of 1991.

If OCC's called to testify after the next crisis, let's try to avoid even the possibility of dialogue such as:

"Mr. Chairman we at the OCC regretfully must concede that
we could have and should have done more in this case."

or perhaps even worse:

"Mr. Comptroller this Committee is very disturbed that your
examiners apparently knew about these problems but were
afraid to report them."

We simply can't AFFORD that scenario again. We can't afford a big surprise. The building might be able to stand on the remaining three pillars, but there would be serious structural damage.

And finally, I realize that all of this contemplates a far better institutional memory, a sense of history than currently exists in the OCC.  But PLEASE keep in mind that everything you do today is NOT NECESSARILY a case of first impression.  We've been down many of these same roads before.

I think that all too often, there's a tendency to minimize the work of people who went before us; that is IF we even know about it, and some of it clearly deserves that fate.   But we can still LEARN from it!..."

Editor:  Wayne's words speak for themselves.