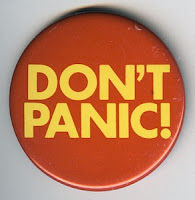 A part of last week's blog post talked about the potential benefits of allowing national banks to secure private deposits as another means to help make uninsured "nervous" money a bit less nervous.

Then along comes the banking crisis in Cyprus and the rule book gets a re-write.  Or maybe it was already re-written and someone forgot to tell us about it.

Last week, the European Union (EU), in collusion with the International Monetary Fund (IMF), did just that with an orchestrated sneak attack on bank deposits in one of its member countries - Cyprus.  The EU and IMF insisted on the confiscation of funds from all levels of the domestic funding structure of the two largest banks in Cyprus – Bank of Cyprus and Laiki Bank -- as a condition for financial assistance.  It was only the principled and courageous intransigence of the Cypriot Parliament that insured depositors were saved from the tax levy, really a deposit-for-equity swap.  Depending on which bank the uninsured deposits hailed from, estimated losses range from at least 60% to a total loss.

Cumberland Advisors posted a nice commentary today ( http://goo.gl/6qJjY ) on the topic of contagion. Their commentary is balanced, reasoned, and concerning. There are other commentators out there though, who are shrieking 'domino effect'!

It's understandable that deeply-indebted governments, and their reluctant saviors, would attempt to avoid using sovereign borrowing capacity to backstop their banking systems by using creditor bail-ins rather then TARP-like bail-outs.  It also appeals intellectually to the Prussian caveat emptor and market discipline wings of our party.  And that's fine if banks produced things like widgets and gadgets.  A few less widget and gadget producers, no sweat.

But the foundation of banking is an emotional intangible - confidence in the stability of banks and the banking system.  Without that confidence, you return to the financial panics which we thought we had eliminated with the creation of a lender of last resort and a deposit insurer in the early 20th Century.  Back then, panics moved at the speed of horse carriages or automobiles, today they can move at the speed of light.  Do we really want to explore terra incognita with the present weakened state of the global banking system?

My take on it is that the attempted confiscation of insured deposits in the developed world means that we can no longer use terms like... unimaginable.. inconceivable... implausible... when we talk about the safety of insured deposits. This is what the combination of desperation and faulty logic has brought about.   It is going to be one of many sad legacies of the continuing European financial crisis.

And if we can't use those terms any longer when talking about insured deposits, then it is not a stretch to posit that the anxiety level for uninsured deposits escalates even further.   Individual bank funding volatility becomes a larger problem when heightened anxieties, real or imagined, drive deposit placement decisions.